Love giveaways? If you already own a reading device, here’s a cool gift to share with a loved one this Valentine’s Day.

Kiss of Death #Amazon #Kindle #Giveaway
Enter for a chance to win one of five kindles and a $25 Amazon gift card to add to your eBook collection! Share the giveaway’s Lucky URL by email and on social media for extra chances to win! Enter giveaway and receive exclusive offers from participating…
DIANECAPRI.COM

NIGHT PASSAGE was featured on The Lineup. The Lineup is a very popular website devoted to true crime and horror.

I’ve been silent for a while, but now I have something to shout about! This month I’m part of an exciting  giveaway with 24 amazing authors and I had to let my friends in on it! I’m sure you’ll recognize some or most of these bestselling author names. We’re giving away a Kobo Aura H20 pre-loaded with 50 ebooks! You don’t have to be a current Kobo user to enter, AND, every person who enters will receive at least five free eBooks just for entering the contest.

You can enter by clicking HERE. 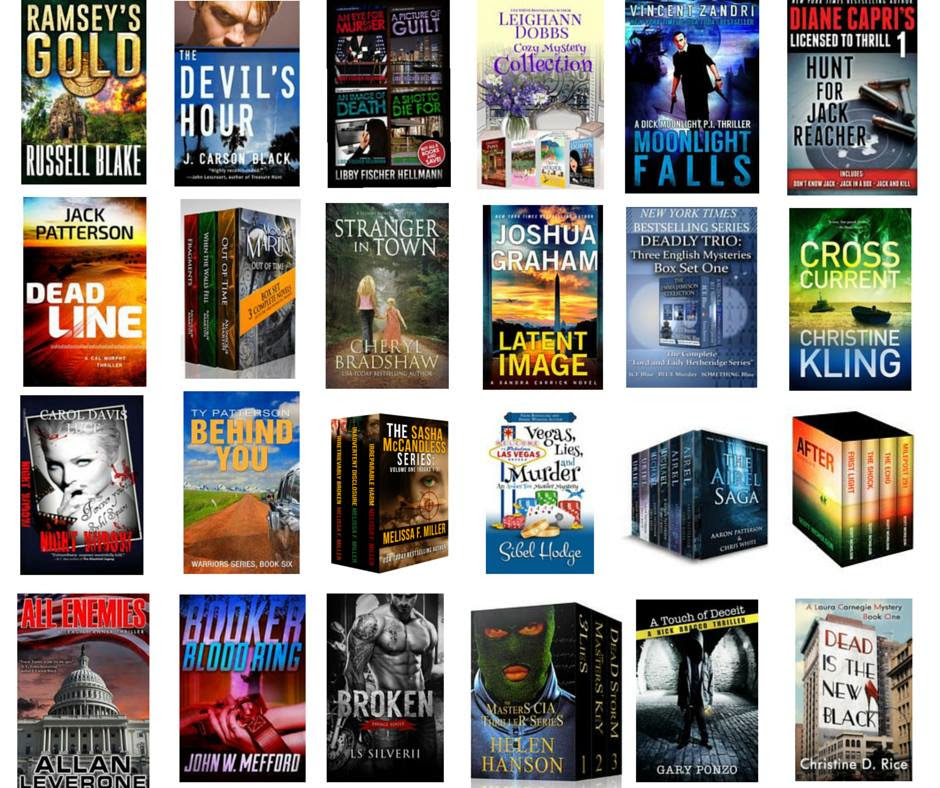 Good luck and have a super Happy Thanksgiving!

Who doesn’t love a good conspiracy theory: Test your memory or research skills for a chance to win!

Participants with the correct answers will be chosen by Random.org.

Four runners-up will be gifted a digital copy of FLIGHT 12: a Jessie Night Thriller.

Please send  your answers to cluce4@excite.com

Click on the Rafflecopter’s Find Flight 12 and tell us about your nightmare seat mate. Read about mine. You might win a $100 Gift Card and more.
Flight 12 – THE TWELVE
ENTER FLIGHT 12 GIVEAWAY #10 HERE Each month, The Twelve brings you one terrific NEW limited edition thriller from our award winning, bestselling authors. Each book features new characters and those you already love. At the end of each book, one person boards Flight 12. Collect and read each of thes…
THETWELVEXII.COM

Which character from this Jessie Night thriller is on board?!

Join us on this special fight where 12 characters from 12 different novella’s take off into the night sky and disappear.  Experience his or her trials and tribulations prior to boarding Flight 12 to Rome. And then help The Twelve discover what happened on May 12 to that fateful Boeing 767.

It’s been quite a ride, but it’s almost over. Check out The Twelve for all the details. Sign on for a chance to win a $100 Gift Card and cool Flight 12 merchandise.

Jessie Night, a witness to a grisly mass murder, must make a grim choice–run to save her own life, or stay and fight for the innocent man condemned to die for that crime. Release date: March 12th. Order now.

To celebrate Women’s Mystery Month, Open Road Media is offering my novel, Night Passage, for only .99c to $1.99 through March!

NEW RELEASE: Deadly Dozen 3 is out!

Limited Time Only at .99 cents!

Exciting follow up to the  New York Times and USA Today bestseller Deadly Dozen and Deadly Dozen 2 is this terrific LIMITED EDITION thriller boxed set featuring 12 individual books from The Twelve and one guest bestselling author.

Rookie TV Reporter Jordan Fox agreed to a blind date with the owner of a trendy new craft brewery. When she sees another guy sitting at the bar slip a roofie into his date’s drink, Jordan goes full-out to prevent the sexual assault, but now she’s targeted by grownup geeks flying dangerous drones with deadly intent. Jordan can run, but can she escape from eyes in the sky who mean to kill her?
___
Darkness on the Edge of Town (Laura Cardinal Thriller)
J. Carson Black

In a runaway case that propels Laura Cardinal, Arizona DPS Criminal Investigator, from a lavish Tucson estate to the secretive heart of a northern Florida town, she must confront the ghosts of her own past. Then another child goes missing—and Laura must race the clock to find her.
___
A Touch of Revenge (Nick Bracco Series)
Gary Ponzo

FBI agent Nick Bracco heads an elite group of anti-terrorist specialists known as The Team. When his team members start showing up dead, Nick suspects a Kurdish terrorist who has revenge on his mind.
___
Covert Reich
A.K. Alexander

In a race against good versus true evil, Dr. Kelly Morales, Gem Michaels, Dr. Ryan Horner, and Detective Tony Pazzini search to uncover the truth and expose it behind the deaths and murders that make up Project Covert Reich.
___
Chase Baker and the Golden Condor (Chase Baker Series)
Vincent Zandri

Chase Baker, the Renaissance Man, seeking inspiration for a new book, and a big pay-off, stumbles into the opportunity of a lifetime: to use his PI and archeological sandhogging skills to seek out an aircraft hidden deep in a remote part of the Amazon Jungle.
___
Sweet Dreams (Mark Appleton Series)
Aaron Patterson

Mark Appleton will stop at nothing to hunt down the men responsible for the death of his family and what he finds will change his life forever.
___
Echoes of Murder (Til Death Do Us Part Series)
Cheryl Bradshaw

When two women with no apparent connection are found dead at the same wedding, medical examiner Reagan Davenport will stop at nothing to discover the identity of the killer … even if it means untangling a deadly web of lies she’ll live to regret.
___
The Accidental Healer
Joshua Graham

After washed up CEO Dave McKenzie loses his job, his wife and kids leave him, he decides to end it all. Only to find a destiny he never expected. And for once in his life, it’s not all about himself.
___
Poe (Alexandra Poe Series)
Brett Battles & Robert Gregory Browne

Desperate to locate her father—who’s been disgraced and accused of treason—Alexandra agrees to run point on a dicey mission to acquire a fugitive that will take her behind the walls of a brutal and dangerous women’s prison.
___
The Organization (Jack Sheridan Series)
Allan Leverone

Killers, rapists,and sociopaths, men and occasionally women with no regard for even the most basic rules of civilized society, face a deadly fate: The Organization, a secret band of assassins working to protect the very society that shuns them, by eliminating the most dangerous predators.
___
Dead Shot
Jack Patterson

When three athletes are found dead in a 24-hour period in a small town, reporter Cal Murphy uncovers a twisted web of crime, deceit and conspiracy. With a mastermind determined to silence him, Cal must decide if reporting the truth is worth his life.
____
Night Game (The Night Series)
Carol Davis Luce

When the King’s Club resort casino becomes the hunting ground for a shadowy killer, owner Jay King places his bets on PI Kasey Atwood’s talents, instigating a game of passion and intrigue.

Jessie Night, a witness to a grisly mass murder, must make a grim choice–run to save her own life or stay and fight for the innocent man condemned to die for that crime.

If you haven’t gotten on board yet, it’s not too late. Read the 12 book series in order or any which way. We don’t care as long as you read them. Join the fun.

Also, check out our latest Flash Fiction contest and ebook.

Congratuations Jana L. Your name was selected by Random.org to win the $25 Gift Card!

And the most creative reason for the flight delay goes to Vicki H. ( I think J.R. Rain will get a kick out of that one!) 🙂 Congrats on winning a free copy of a Flight 12 – A Jessie Night Thriller (due out March 12).

Please contact me at caroldluce@gmail.com with your email address and preference for either Amazon or Barnes & Noble gifts.

Comin’ Soon! The latest in the Flight 12 series, a Kylie Cain Thriller by A.K. Alexander &  J. R. Rain, has been delayed due to… what? Maintenance? Engine trouble? Emotional meltdown on the plane? Snakes? Murder?

Post your guess on my blog comments ( caroldavisluce.com ) for a chance to win a $25 Amazon or B&N Gift Card. Select from the list above, or be creative and write your own reason for the delay. Most creative response will also be eligible to win a free copy of my Flight 12 book due March 12.

Do you want to read the latest creation from The Twelve?  Well, here’s your chance to see what happens when ten of the Twelve get together to create a story without ever consulting each other about the narrative.  Here’s how it worked.  One of the authors began with an idea and wrote a couple of paragraphs about someone being chased.  That’s it.  Then the next author continued the story, then passed it on to the next author.  The result is unreal.  Ten brilliant authors bringing their own talents to the table.  Also, anyone who signs up for our mailing list will receive a free copy of the Flight 12 Flash Thriller as well.

Here’s the contest part.  Do you think you know your favorite author’s style?  Well let’s put it to the test.  We will offer the first segment of the story below and you have to guess which of the Twelve authors wrote it.  We will give you names to choose from.  Simply leave your reply in the comments and we will pick a random winner.  The first winner will receive a free copy of the Flight 12 Flash Thriller and a paperback copy of Gary Ponzo’s first Nick Bracco thriller, “A Touch of Deceit.”

Heads up, fellow thriller fans: Deadly Dozen 2 by The Twelve is only available for 5 more days… and then it disappears forever!

When we published it in October, it was for a limited time, and that time is coming to an end. Just a friendly reminder because this boxed set really is a steal!

Something fun is going on over at ‎TheTwelve‬! Join the fun and enter the contest!

One Winner Every Day for Twelve Days!

Today’s Question: Allan Leverone wants to know which member of The Twelve is a fan of alternative rock music? (Need a hint? Look here:http://thetwelvexii.com/fun-facts/)